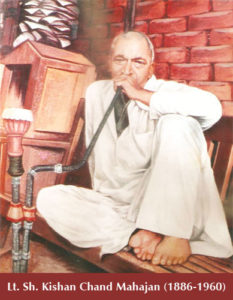 "It was his vision that the KC Group became the biggest Timber Company & Forest lesses of North India."
Lt. SH. KISHAN CHAND MAHAJAN (1886-1960) was an "Iron-Man" with a tender heart and a  "Great Visionary" of his time.

The word "K.C." got its recognition during his time. He did dream big and made such dreams a reality. He thought about business and transformed his thoughts into a profitable venture. He never looked back in his sincere endeavors and helped the needy people subsequently when the socio-economic scenario of our state was break.

"A Great luminary of his time. He was elected MLA & MLC of J&K State Assembly. He was the most senior leader who always worked for the cause of downtrodden people. Such was his popularity & stature that a street(mohalla) is named after his name in jammu"

A great luminary, and his english conversation skills and speech where of impecable nature thus people used to lookup to him and take notice of him where he travelled in the state. Sh. Ram Chand Mahajan worked tirelessly to empower the people of jammu and set up many selfhelp groups centres for providing employment to women and underpriviliged.

"Being in the forest lessee business our noble Leader traversed through unhospitable conditions in the forest with no adequate communication or road connectivity to take the group to graeter heights. His hardwork and sweat continue to inspire the next generation of business leaders. "

SH. SATISH CHAND MAHAJAN followed the foot-steps of his noble father Sh. R.C. MAHAJAN who managed to embrace the challenging responsibilities in governing the business empire with his unfailing wisdom and perseverance. Since his father was involved in politics, he continued working in absence of his father and he pursued the tasks right from forest/timer to industries with a great zeal and enthusiasm.

He travelled widely in the forest terrain and inhospitable areas of J&K and Himachal Pradesh to diversity the empire. He indeed has left footprint on the bare sand so that the family tree, of the same group, does not forget the roots and the ethos.He believed in himself no matter what was stored in unforeseen future. He often quoted the words of wisdom:

"Count your blessings, not your troubles. Success depends upon ability, industry, motivation, psychology of learning and team spirit".

He never imitated in his sincere efforts and often told his workers not to copy others since the attributes of imitation are suicidal. Like Tom Peters, he also believed in optimism and his great Mantra : "In business be distinct or extinct" and Sh. Satish ji did absolutely distinct in business and thus survived with dignity in the same task bestowed upon him by his ancestors.

Being a well known Philanthropist, he provided moral and material assistance to the destitute of both urban and rural areas. Interesting, he never left a sign/trail of donation or help anywhere. Money donation went to various Temples, Charitable Trusts and Orphanages perennially but devoid of any written record. He imbibed the essence of Bhagvad Gita : "Do your duty and not to wait for the reward" and truism lies in the pious mind and heart of philanthropist on whose name "K.C. Satish Foundation" has been imitated. Whatever this great personality did, his worthy sons have carried forward the legacy of K.C Group/Society in a pragmatic manner. 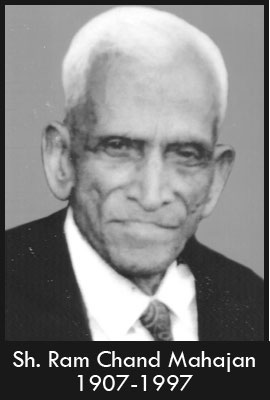 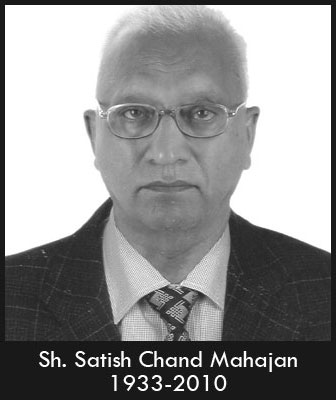 "Always do right and this will gratify some people; but astonish the rest. Whereas success and failure lies in conformity with the domain of time".

The group was the first Forest Lessee of Jammu and the Biggest of North-India in which they had forests in most parts of Jammu and Kashmir and Himachal Pradesh.

"Three Karma Yogis" of Mahajan Family in Jammu Sh. Kishan Chand Mahajan, Sh. Ram Chand Mahajan & Sh. Satish Chand Mahajan laid the firm foundation of "K.C. Empire" through hard work and self-less service to mankind in particular. At different stages of evolution and development of the K.C. Group in J&K State, these three exponents never looked back in achieving the pinnacle of glory in different business domains. Right from the past era till date, the empire faced various tribulations, at different levels; but the legacy of Mahajan Family maintained its status and presence in the state with dignity and honor.

The Advent of New era of K.C. Group set in the state as well as in the Inter-States thus diversifying the business interests in Paints, Biscuits, Bread, Flour Mills, Metals, Cinema Halls, Restaurants, Hotels, etc.

It took 20 years for the K.C. family to emerge as a "Sole and Reliable" Business Group in the state and thus contributed its might in the business subjected to J&K state. The flag bearers of K. C. Group pursued their tasks and followed the right trails of elders or what was advocated by the elders.

Efforts have been made to expose the mind set of each flag bearer vividly so that others might understand the sacrifices made by the people associated with K.C. Group.